Paige VanZant committed to bare-knuckle fighting for ‘the long haul’ but acknowledges pressure to win in second BKFC appearance | espn-news.com 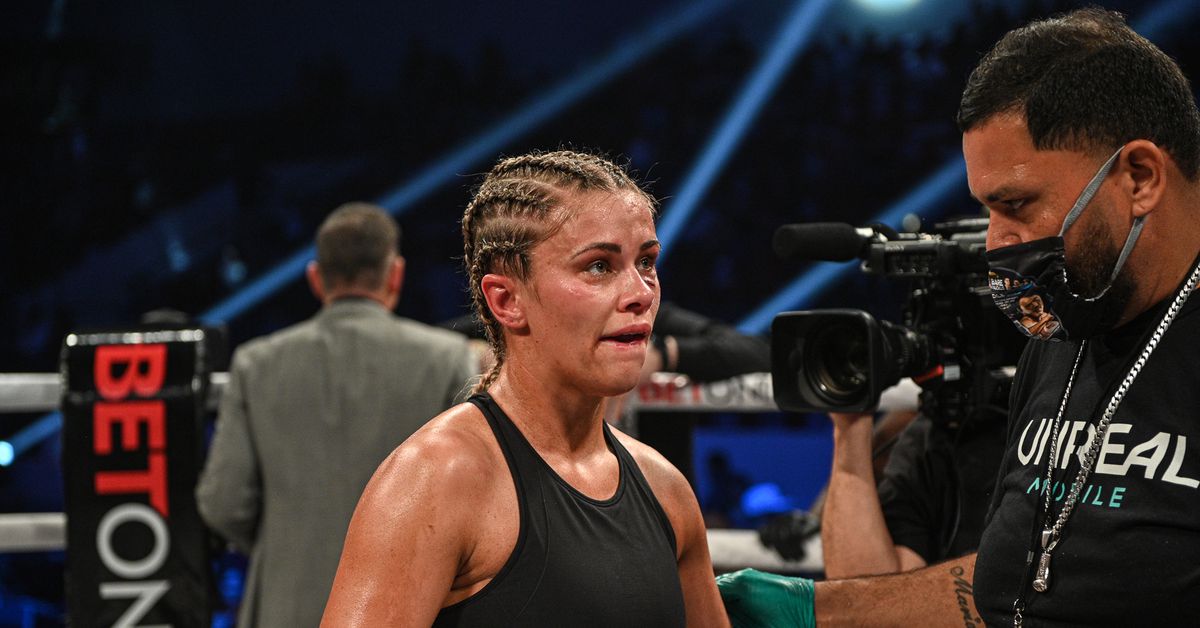 Paige VanZant will be the first to admit that no amount of training can truly get you ready to compete in bare-knuckle fighting until actually stepping into the ring to do battle.

Back in February, the former UFC star made her debut with Bare Knuckle Fighting Championships after inking a lucrative contract with the promotion as a free agent. In the early moments in her fight against Britain Hart, VanZant had her moments but she was also experiencing what it was like to get hit without gloves for the first time and then delivering the same punishment in return.

By the time the action advanced into the fifth round, VanZant had finally gotten comfortable with the experience and she delivered with her best offense in the fight but unfortunately it was too little, too late and she ultimately lost a unanimous decision.

While it certainly wasn’t the result she wanted, VanZant acknowledged how much she learned that night and how it’s only going to make her that much better when she returns in the main event at BKFC 19 on July 23.

“There was questions going into the fight that you couldn’t answer until you actually fought bare knuckle,’ VanZant explained when speaking to MMA Fighting. “I’ve never been in a street fight in my life so I’ve never truly felt the damage and the intensity of fighting with no gloves on. You can’t train the way that you fight 100 percent. We can’t punch each other in the gym without gloves. There are elements in bare knuckle that are completely different than even straight boxing. It took until that fifth round for me to figure it out. I feel like I did learn quickly. Unfortunately, it wasn’t fast enough in the fight.

“Now going into this second one, I do feel like the experience is going to be a huge advantage and the people that have more bare knuckle fights, they’re going to prevail. They’re going to be the ones that continue to rise. It’s experience and I feel that’s in any fight game. The more experience you have, the better. Going into this next one, I feel like I know exactly what I’m in for. There’s no questions. I know exactly what it’s going to feel like. I know how short the rounds are going to be. I know the pace that I need to set immediately and I’m really confident for this next fight.”

When she fights on Friday night, VanZant will be staring across the ring at a familiar face as former UFC opponent Rachael Ostovich will make her own BKFC debut after signing with the promotion earlier this year.

In their previous meeting in the UFC, VanZant got the win with a second-round submission but there won’t be any grappling in the rematch as Ostovich obviously looks to settle the score.

While she’s expecting the unexpected in order to get ready for the fight, VanZant knows her prior experience in BKFC will surely pay dividends, especially while facing off with a bare-knuckle novice like Ostovich.

“I do feel really confident in the pressure I’m going to put on her and the pace I’m going to be able to maintain,” VanZant said. “I know how good my cardio is and the difference between the rounds is that it’s five, two minute rounds. It’s like really, really short rounds but it’s a sprint. It’s almost like your cardio has to be better in different areas. It’s a two minute sprint. There’s no lag time. There’s no jiu-jitsu. There’s nothing like that.

“So just the confidence that I have knowing that I’ve done it already. I know what to prepare for. I do feel like that gives me an advantage.”

Because she was such a high profile signing for BKFC, VanZant has embraced her role as one of the faces of the organization but her grace period to develop into a serious threat in bare-knuckle competition has arguably already expired.

VanZant knows in order to back up the contract she signed and the future she intends to make for herself through BKFC that there’s no other acceptable result than a win against Ostovich on Friday.

“I do put that pressure on myself, especially going into this one knowing I’m a UFC veteran and at the end of the day, I left the UFC and I want to make my mark in bare-knuckle boxing,” VanZant said. “I want to make my mark in all these other organizations. I want to be known as a skilled, talented professional fighter. There’s one thing about my career — I know I’ve never taken an easy fight. I had the majority of my career in the UFC. Almost all of my career was in the UFC. I had one amateur fight and then I went into pro and I’ve never fought somebody that was a throwaway fight for me. I feel like I can always have the confidence knowing I always fought the toughest of the tough.

“Beyond that, I love winning and that’s the point. That’s the reason we fight because we want to win. I do put the pressure on myself, especially this fight. Especially against Rachael knowing that I’ve already beaten her but this is a different animal. It’s a different feeling inside of me now. I feel like I need to go out there and I need to finish her quickly because my confidence depends on it.”

When VanZant first joined the BKFC roster, many questioned her motives and wondered if this was just a promotional stunt or a cash grab after exiting the UFC but she emphatically answered those critics with a hard-fought performance in her debut.

In her second appearance, VanZant knows winning is her only option because now that she’s got a taste for bare-knuckle fighting, she plans on sticking around in the sport for a long time.

“I’m still young and I just started bare knuckle,” VanZant said. “I don’t plan to leave the organization any time soon. I have those questions answered.

“I’m in it for the long haul and I feel like me getting experience even over somebody I’ve already beaten is just going to make me better.”